Today I was shirtfronted by a colleague about something we said on our podcast. About how as a school we’re pretty intense on the uniform front outside of school but that we as staff don’t wear a blazer home ourselves. He challenged me on the hypocrisy of it all.

I don’t follow the same rules as students. I think schools have rules that serve different purposes. Some rules are to make it a safe environment. That’s a uniform rule. Uniforms make schools safer by reducing bullying, or at the very least giving the bullies one less target. Some rules are there to educate students on the appropriate way to behave. Wearing the uniform you wear well, teaches students to have some respect in how they dress. I personally am not wearing a blazer, BUT, my clothes are tucked in and worn to the same standard I expect them to. I don’t need that rule to teach me that.

I’m a middle-aged teacher with a beard. At no point in the foreseeable future will I ever not have a beard for longer than the month of November. I also won’t be wearing a blazer to and from work any time soon. Add to that, I will not be waiting in line behind the kids to get some food from the tuck shop at lunch. I’m also not about to stop swearing any time soon, watching R rated films or the many other things that we don’t allow our students to do. For example, I will continue to drink in public (as in public houses, not on the street because that is illegal) and while at the pub, I’m going to use pub language.

I will, however, enforce the school rules when it comes to the way our children act in public. For several reasons, one being that we are trying to impose on them the school’s code of conduct and secondly that is my job.

See, I don’t necessarily agree with all the rules that a school imposes. I don’t have to. In fact, I’ll simply enforce them. Plain and simple. This is a personal line that I’m prepared to draw. At a previous school, we had the draconic rule of no phones at school. I’m not sure if this was intended to apply to staff as well but there were a few staff who also decided that if students weren’t to have their phones in the classroom neither should they. Not I. I need my phone. I’m an adult with adult responsibilities. I may need to be contacted by the staff at my children’s school, the real estate agent, a doctor, or for whatever reason. This isn’t the case with children. In fact, I can’t think of a single reason that a parent needs to contact students during the school day where they couldn’t go through the school’s front office. They have the number. On top of that, I use my phone for work purposes. If I need to fire off a quick email, it’s there and quicker than my laptop. If I need to quickly google something, it’s there and still quicker than my laptop. If I need to do some calculations, it’s there and I don’t have carry around a calculator (so boo to you Mr. Armstrong who said I wouldn’t always have a calculator in my pocket). But on top of that, I know how to self-regulate. I’m not about to start tweeting mid-lesson. I do however think kids should have access to their phone or some such device in class. But at that school, the policy was a hard no, so I enforced it. Personally, I value consistency.

Where I disagree with a rule and don’t follow said rule, I do so knowing that there are potential consequences. I’m also prepared to deal with those consequences. Sometimes that’s the case with the students and I really respect that. I respect when a student goes against the rules and wears the consequence. I mean, obviously, I’d rather they did what they were supposed to, but if they have to break the rules at least it was a decision. As an adult I’m allowed to make my own decisions, part of the role of our rules are to guide them until they’re mature enough to make that decision themselves. 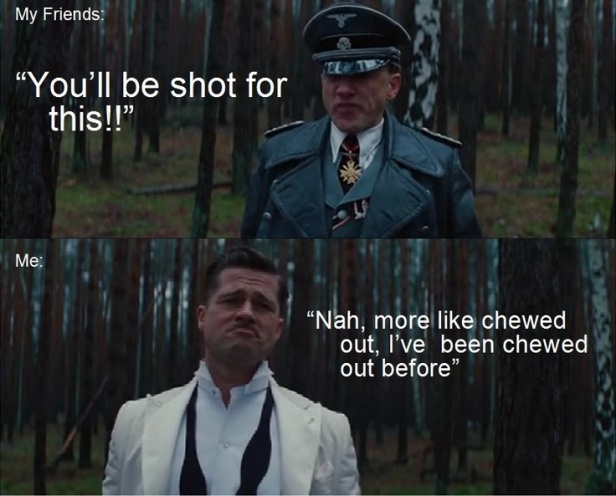 As for uniform and the reason that I won’t be wearing a blazer home anytime soon, there are several. As a teacher, we’re not paid a large wage. I’m paid well enough but I’m also not spending that large a percentage of my wage on clothes. I have hobbies and there are new Dungeons and Dragons books to buy. I do however spend significant parts of my wage on school supplies, so it’s not a lack of dedication. But that isn’t even my main concern. I don’t think teachers should be wearing ties, ours is not an office job. It’s an active job – or at least it should be. Now I do wear the tie, but I’ll happily take it off in the classroom when it gets in the way. I’ll even encourage the students to do the same.

And then there’s another component. When I leave the school in my work clothes, I’m relatively anonymous. In fact, when I’m not at work, generally I’m not a teacher. I’m Pete. I like metal, beer, dungeons and dragons, educational theory and music. I hang out with my family and my friends. I mark work, so much marking. But I’m not employed outside those hours, I’m not owned by the school.

Yet, if I was wearing a school polo shirt (oh the dream of being able to teach in a polo shirt) I wouldn’t have a beer in my hand. I would most likely only go straight home. You wouldn’t hear me swearing in public. And the logic is simple. I’m proud of our school and the good work we do. If I’m wearing the school colours in public I represent them. I would make damn sure that I represented them well. If I’m visiting another school on behalf of our school, you know I’ve got a blazer on then. A sweet brown blazer. That’s why I will stop the students in their poorly attired uniforms. Because they represent something. That’s why I’ll pull them up on their language on the football field. Because they represent something. That’s why I’ll reward them if I see them doing something positive in the community in their uniforms. Because they represent something.

More and more however, I’ve turned into my father; do as I say not as I do.

2 thoughts on “Hypocrisy thy name is Me”

Support the blog and podcast